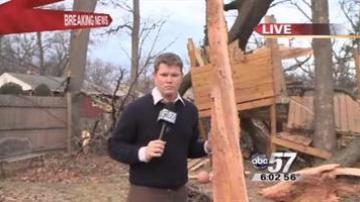 SOUTH BEND, Ind. - Two kids were playing outside when three trees snapped in half and came crashing down destroying their tree fort in the back yard.

"It was like swoooosh and the wind gushed," Cameron Alumbaugh, 9, said while holding his 5-year-old sister tight.

Cameron and his sister Chloe were outside when the winds gusted to nearly 50 m.p.h.

"When it hit our tree house and everything, it was like everything was falling down so we ran inside."

"I couldn't believe it, it's kinda devastating but it's just a play house so we're okay," Masterson said.

The kids were upset, as you can imagine, both by the sounds of the crashing trees and that their tree house was damaged.

"Their dad built that tree house for them last summer," Masterson said.

There wasn't much left of the play area, the back fence was also badly damaged as the branches came crashing down, the garage was also so badly damaged that it shifted on its foundation--it will likely have to be taken down and rebuilt.

"I'm just so happy that the kids are okay," Masterson said.