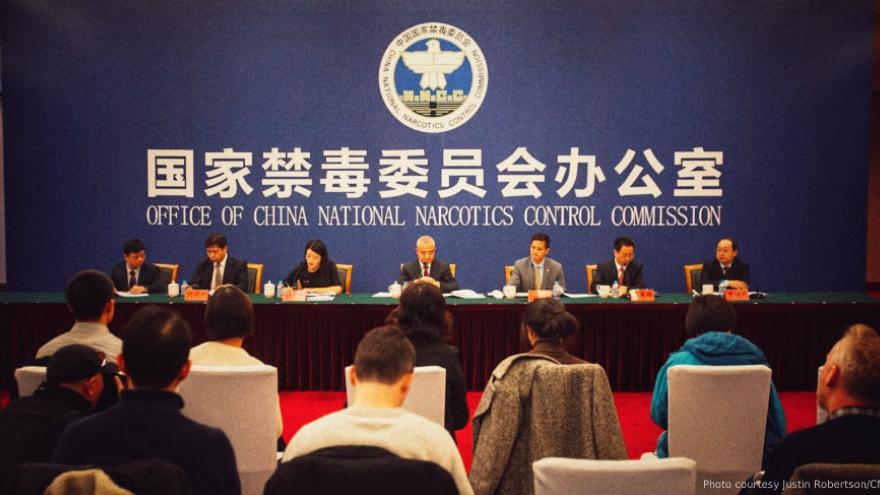 (CNN) -- Chinese authorities on Friday pushed back at allegations that China is the main source of fentanyl, a cheap synthetic opioid at least 50 times stronger than heroin, flooding into the United States.

US President Donald Trump last week declared the opioid crisis a public health emergency and promised to make the issue a top priority when he meets with Chinese counterpart Xi Jinping in Beijing next week. Trump said he expected Xi to "do something about it."

"While we don't deny that some fentanyl substances abused in the US have come from China, we don't see sufficient evidence ... that most of them have come from China," said Wei Xiaojun, deputy secretary-general of National Narcotics Control Commission, China's top drug enforcement agency.

Wei said that the US had provided only "limited" information that huge amounts of fentanyl precursors has been shipped from China to Mexico before the final products hit the US market. He added that the Mexican government has not brought up the topic at all.

A February 2017 report from the Congressional US-China Economic and Security Review Commission labeled China as the primary source of fentanyl in the US, citing law enforcement and drug investigators.

At a press conference on joint Chinese-US effort in fighting drug crime, Wei stressed that China has proactively regulated 23 fentanyl substances, exceeding both UN and US standards.

"We did this even when there is no widespread fentanyl abuse in China," he said. "We were aware of the crisis in the US and took the US concern into consideration."

Wei expressed "regret" over the indictment last month of two Chinese nationals accused of manufacturing and distributing large quantity of fentanyl and other opiates in the US.

"The suspects' arrest will depend on evidence provided by the US and evidence discovered by Chinese police," he said. "The two countries have different laws governing such substances -- and China can only take actions based on its domestic laws and what its law enforcement officers find."

Since 1999, the number of American overdose deaths involving opioids has quadrupled. From 2000 to 2015, more than 500,000 people died of drug overdoses, and opioids account for the majority of those. Recently released numbers from the Centers for Disease Control and Prevention found that around 64,000 people died from drug overdoses in 2016.

US officials present at the press conference highlighted cooperation between the two countries in Washington's war on opioid abuse.

"Once China controls the substances, it has dramatic effects in the United States in terms of lives saved," said Lance Ho, the US Drug Enforcement Administration's country attaché in Beijing. "Once they do that, we see a decrease in the usage in the United States."

"With these cases, what's really important is the real-time information sharing -- that's vital."