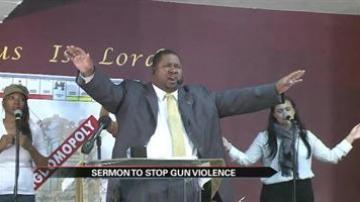 SOUTH BEND, Ind.-- A gunman wearing a mask entered a South Bend church Wednesday and shot two bullets at a member working inside. Sunday Kingdom Christian Center in South Bend held services for the first time since that shooting.

The message focused on spiritual warfare and advocacy against gun violence.

South Bend's Police Chief Ron Teachman attended the service, and he spoke to the congregation about crime prevention.

Kingdom Christian Center's pastor said their church is still in shock, but they are praying for the shooter.

Pastor Canneth Lee said, “You can run from people, but you can’t run from God.”

Chief Teachman asked the congregation to be role models in this community.

Chief Teachman said, “It’s particularly offensive not only to the person who was shot at, not only to the congregation but the pastor that somebody brought that level of violence into a house of faith.”

Chief Teachman said he's open to meeting with people in the neighborhood about crime prevention programs.

Chief Teachman said, “It will require a partnership of all of us to solve this dilemma of gun violence.”
The shooting is still under investigation, and neither Chief Teachman nor the pastor know the shooter's motive.

Pastor Lee said, “I want them to know that we don’t have to be afraid, scared, or ashamed, but if we all work together, we can lift this neighborhood up.”