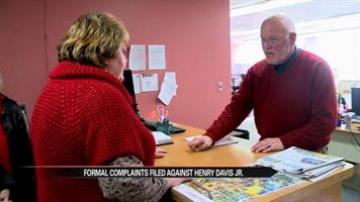 SOUTH BEND, Ind. -- Three days have passed since Common Council Member Henry Davis Junior posted a controversial photo on his public Facebook account. A group of citizens filed a formal complaint against Davis Wednesday afternoon because of the post.

The photograph depicted an adult man engaged in inappropriate activity with a dog.

The formal complaint says in part, "The posting on Facebook is obscene, against public decency and shows a total lack of professionalism."

"This is so far crossing the line that he's about meet himself on the other side," said Becky Kaiser who filed a complaint.

She doesn't want to see bestiality in a public discussion initiated by her councilman.

"There is many different ethnicities in his district. This was-the comments were racist, the pictures were obscene, this is not how someone who is supposed to be representing everyone in his district acts," said Kaiser.

City Clerk John Voorde time-stamped a handful of formal complaints after telling the group how to submit one.

Any complaint against a common council member must be written and must mention city code 2-10.1. It cannot be filed anonymously, it must be signed and the complaint must request the South Bend Common Council Rules Committee look into it.

The written complaints will now go to the Common Council Rules Committee.

"The Council Rules Committee is a bipartisan committee made up of 3 members and the council president," said Voorde.

"But of course that's subjective and it's determined by the  city council themselves. But once they get into that procedure, it'll all be a matter of public record," said Voorde.

The rules committee has only met twice in the past 30 or so years.

Ironically, the last formal complaint against a common council member was filed by Henry Davis Jr himself.

In that situation, Davis claimed that another common council member racially profiled him by saying he looked like a drug dealer.