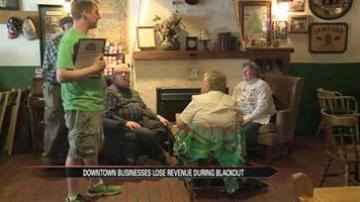 SOUTH BEND, Ind. -- After nearly three days without power, the lights are back on in dozens of downtown South Bend businesses and restaurants.

Investigators are still trying to determine what started the fire.

"When the lights came back on, we were able to put all of the food into the restaurant and got our health department inspection and were open first thing this morning," said Philip Schreiber, owner of Chicory Cafe.

Health department officials say they started inspecting restaurants downtown as early as Friday and by Monday all were given the green light to reopen.

As downtown restaurants reopen, many local owners spent Monday tallying up the loss in revenue from what's usually the biggest economic weekend of the year. More than 30,000 visitors came to town for Notre Dame and Saint Mary's graduation ceremonies.

"Certainly I think some of them still lost some business, even the ones that were able to reopen, but partial business is better than no business in that situation, so we were glad to see some of them reopen," said Aaron Perri, Executive Director of Downtown South Bend.

Although Fiddler's Hearth was open for lunch on Friday and remained open through the weekend, owner Terrance Meehan estimates a loss of around $7,000.

"We did lose income. We're trying to tally that with our expenses from our electrician and the rental of the generator and fuel," said Meehan.

Schreiber decided not to reopen during the power outage and estimates a loss somewhere in the thousands.

"We lost our Saturday, Sunday morning coffee crowd and the Bloody Mary drinkers on Sunday but on the whole, we'll survive, we were fine," said Schreiber.

Despite the loss of revenue, many local business owners say the consequences of the outage could have been much worse.

"Outside of the financial impact I'm just glad that nobody was hurt," said Meehan.

City officials say they are working with Downtown South Bend to determine how much revenue was lost last weekend.