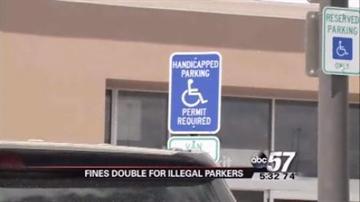 SOUTH BEND, Ind. -- The city of South Bend has doubled the fine for drivers who illegally park in handicapped spaces. Some drivers say the doubled fine isn't going to be enough of a deterrent. They say the real problem is not enough enforcement.

"I mean I don't do it all the time at all because I never leave my kids outside," she said. "It only took me like a couple seconds."

But that couple of seconds means something to disabled drivers like Ann Snider and her husband.

"I just literally have a hard time getting in and out of my car," said Snider. She said many times she pulls up to the handicapped parking to find all the spots filled and several times they spot vehicles that do not have handicapped plates nor a hang tag and that frustrates them.

This week, the South Bend Common Council voted unanimously to double the penalty for parking illegally in a handicapped spots. The penalty increased from $50 to $100.

"Same violation with the same way of enforcing it, just the penalty is now double," said Captain Phil Trent of the South Bend Police Department.

Snider says she thinks the fine doubling will help keep able-body moterists from parking in handicapped spots that she relies on being available.  "That way it will make people realize that, you know, you are taking somebody's parking spot," said Snider.

But not everyone thinks the increase fine will make a difference.

"Clearly cops don't come in here (the Walmart parking lot) and give anyone tickets, so why increase the fine if they're not going to do it anyway?" said Joetta Fry of South Bend.

Kareemah Fowler, the Ordinance Violations Bureau Clerk with the city of South Bend says 174 tickets were written for the violation last year. Of those, she estimates that 95-percent of those tickets were issued for downtown parking violations.

In Mishawaka, Tim Williams, with the Mishawaka Police Department said 73 tickets were issued last year and thus far this year 68 tickets have been written.

"If they don't need that spot then they shouldn't be parking there," said Nancy Kline of South Bend. Kline says she is considered legally blind and plus she says she has severe arthritis. Fry drove Kline to Walmart and they both say they appreciate the handicapped parking upfront to make their trip as convenient as possible.

However Fry says, "The only way it's going to make a difference is if a cop comes in here and actually monitors the area and catches the people parking here."

Police officers can ticket violators. In addition, both Mishawaka and South Bend have Downtown Ambassadors who can also write tickets.