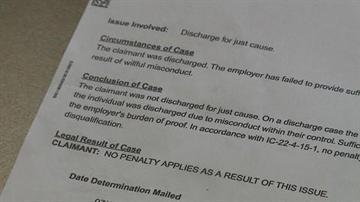 SOUTH BEND, Ind. – Some see it as a minor victory, others a substantial one that casts doubt on the South Bend’s ability to fight a civil battle over the alleged wrongful termination of long-time city employee and former Police Department Communications Director Karen DePaepe; it could be the warning shot over the bow of the City’s ship.

This department is in charge of conducting all investigations connected to claims for unemployment in Indiana.

The Determination of Eligibility case began shortly after DePaepe was fired by the Mayor’s Office from her position in April.

The Mayor has made it clear that in his opinion DePaepe had come within inches of being charged with a crime for her involvement in a federal investigation into practices at the Police Department related to the recording phone calls.

When DePaepe was fired after 25 years of service to the city, without a single disciplinary action in that time, the Mayor’s Office said it was for conduct unbecoming a City employee.

The City’s personnel handbook does not define such a term.

The termination also did not follow any of the laid out plans for punishment based on a violations of city policies and procedures.

The handbook actually details what should happen with an employee’s employment while they are suspected, charged, and convicted of crimes.

When DePaepe filed for unemployment the City refuted her claim, saying she was discharged for just cause.

In Indiana, the burden of proof for such a claim is on the employer; in this case, the City of South Bend.

After gathering all the relevant information, per federal law, the claims deputy made a conclusion.

According to the deputy, “the [City of South Bend] has failed to provide sufficient information to establish the discharge was the result of willful misconduct.”

Duerring, pleased by the conclusion, says it will not make or break any potential lawsuit his client may file against the City for wrongful terminiation; but it does add more ammunition to his arsenal. “It is a continual stream of corroboration that in fact, the City cannot substantiate even at an administrative level, that they justifiably discharged my client,” said Duerring.

That being said, the City’s inability to provide proof DePaepe did something wrong should be concerning for those worried about potential litigation, according to Duerring. “The difficulty level of proving that is practically speaking much less than it would be in a court of law… I don’t know how they expect to be able to prove it, in a lawsuit,” said Duerring.

It appears, at this time, the City failed to appeal the decision; now the City is on the hook for 100 percent of DePaepe’s unemployment insurance benefits for 26 weeks.

Spokesman for the Department of Workforce Development, Joe Frank, talked to ABC 57 in general terms, and not about any specifics related to DePaepe’s case.

According to Frank, Indiana is an at-will employment state, but it is also a no fault state. If you lose your job through no fault of your own, your employer has to pay unemployment insurance benefits, especially if they want to fire you for no reason at all.