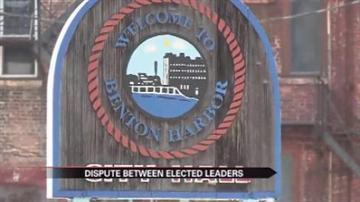 BERRIEN COUNTY, Ind. -- A Benton Harbor City Commissioner claims the mayor called him a homophobic slur. The mayor denies saying it and says he's offended at the accusation.

"Anybody's that going through this, you do not have to tolerate this. And this should not be tolerated. And I want to be an advocate. A trailblazer for those people in Benton Harbor that feel invisible and are scared and are bullied," said Trenton Bowens, Benton Harbor City Commissioner.

Bowens claims Mayor James Hightower called him a punk and says he does not appreciate it.

But Hightower denies ever having used such language and responded to Bowens' claims with this statement.

"This is not uncommon and has been the nature of Benton Harbor politics for years, if you don't agree you're attacked and defamed. Again for the record I made no such statement and I'm offended at the suggestion that I did."

Hightower says he and Berrien County Commissioner Marletta Seats are the ones being attacked.

Hightower says this is all political, that Bowens' accusations all boil down to who supports Benton Harbor's city income tax proposal - and who does not.

Bowens and Seats do not see eye to eye on the income tax issue.

"She didn't like what I had to say in my commission comments, so she followed me outside and got into it with me and the police had to hold us apart. And she called me a homophobic slur," said Bowens.

"I did not. And I would not call Commissioner Bowens a name that is derogatory. He has a girlfriend. Why would I even make that statement?" said Seats.

"I'm really disheartened at this point that anybody would even say that about me that knows me," said Seats. "I respect everybody's choice of who they choose to be with."

For her part - seats says she feels like she has been dragged into the middle of a political power struggle between Hightower and Bowens. In any case- no one is apologizing yet.

And the Benton Harbor city income tax proposal is still months away from being decided.