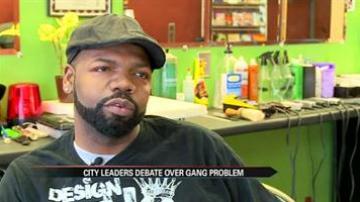 When John Swoveland Jr was shot and killed by a stray bullet, several of the people charged in the case received "gang enhancement."

Kids as young as 13, to grown adults said there are gangs in South Bend.

No one understands why officials are side stepping the issue, but one resident said you can rename the gangs to "book clubs" and they're still going to be there.

If you want to hear the scoop about South Bend, just find the nearest basketball court.

DeShawn Adams and Jalen Currie are both 13-years-old.

They see the problem clearly.

"I think it's wrong for people to just go out and start killing people who are innocent for no reason," said Adams.

Adams says he has heard about gangs since he was nine years old.

We asked why he thinks people join gangs.

"Like it helps you and you go around and people know your name and know you as a criminal and they think it's good," said Adams.

Adams and Currie say it's not a smart thing to do.

"The people that don't end up in gangs are smart, the stupid people just go in the gang," said Currie.

Barber Kintae Lark hears it all.

Every time a man sits in his chair at Inspiration Barber Salon, he learns a lot about what's happening on the streets

"Yeah it's very tremendous. Some of them have even been clients that come through the door that have become victims or things of that sort. As a personal view, violence in our community is a very big issue. I don't believe violence is the problem, I think the problems lead to the violence. Violence is an issue," said Lark.

Lark says he tries to work with these young men.

"A lot of things are going to point right back to the father and right back to the home environment. Not that it's the whole answer to anything, but for a lot of young people, they're crying out for something. And so what we see to do is we see to provide it. So we do mentor, we do have sessions. They may come for the day, sweep a little hair, put a little money in their pocket, something to keep them in a safe environment," said Kintae Lark.

Inspiration Barber Salon will hold an event this Saturday at 11 a.m. for everyone who wants to attend.

Lark is going to take his barber chair outside to the curb and give haircuts.

There will be a positive rapper there as well.

Lark says he wants to bring people together.