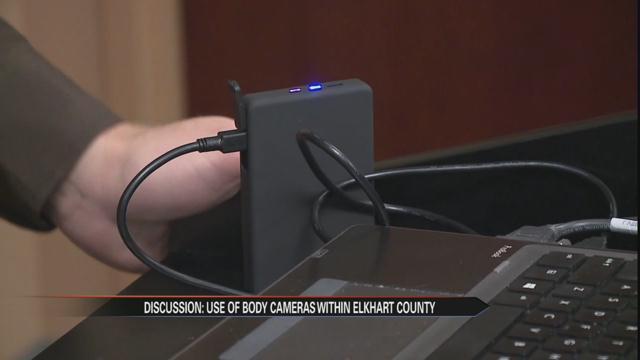 In Elkhart County the sheriff's department has been using body cameras since 2014 and Goshen Police have been using them since 2011. Elkhart officials say more information is needed before they make a decision.

"When it comes to jumping into a new initiative like body cameras we need to do the homework and thus far the study material is not there," says Brian Dickerson, an Elkhart common council member.

Dickerson says more questions regarding storage and freedom of public information need to be answered before he is comfortable making a decision to spend taxpayer dollars.

"It was an easy decision for us," says Bret Weddell, Goshen City Council member.

Weddell says after Goshen Police ran trial runs on different cameras within the community the vote to upgrade the old 2011 cameras was simple.

"In the past a few citizens had some claims against our officers and it was very simple. He reviewed the video, invited the citizen in to look at the video, end of conversation," explains Weddell.

The Goshen Police Department has 53 body cameras, enough for every patrol officer. The footage they collect falls under public record and is burned to a DVD. Storage takes up a big chunk of the budget at about $31,200 a year.

"We spoke with other agencies about what they are doing and how they are doing it, there are still a lot of questions that we don't have answered," say Sergeant Chris Snyder of the Elkhart Police Department.

Sergeant Snyder says the Elkhart Police Department has gathered information from neighboring agencies but some members of the common council think it is still too early to make a decision based on this information.

"Let other department who have chosen to invest those dollars let them learn from their mistakes and let us learn from them if other communities are making those investments lets work with them and gather that information," says Dickerson.
Share this article: