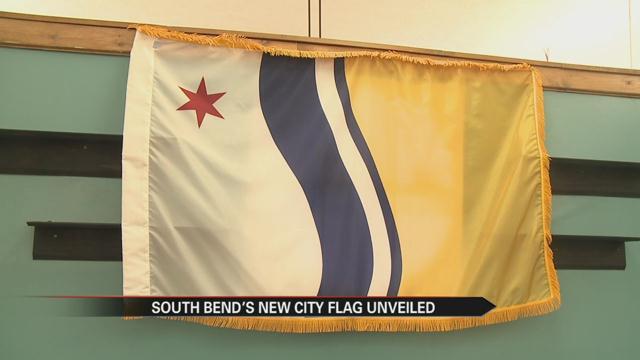 The city of South Bend unveiled the new design of the city's flag on Wednesday. The design process began in October 2015 and the new flag is expected to be approved by the council on Monday, March 14.

"To me this is the official exclamation point on South Bend 150. We spent a whole year celebrating our city's birthday, past, present and future. Now we have a new symbol to rally around as a city," said South Bend Mayor Pete Buttigieg.

Members of the South Bend 150 committee held a public meeting in October 2015 to get community input on themes and guidelines for the new flag.

Entries had to include representations of the river, themes of connectivity, diversity and innovation. The city received over 200 entries from residents of all ages, according to the mayor's office.

The flag committee, made up of professional designers, marketing professionals, city officials and South Bend 150 representatives, narrowed down the field to three designs.

After asking for feedback from the community, the final design incorporates design elements from all three designs.

The flag has a red six-pointed star representing all six districts of the city. The two blue S shaped lines with a white stripe in-between represents the river, physical and virtual connectivity and the city's industrial roots.

The city encouraged the designers to include the colors the city's traditional color palette of red, blue, yellow and white. The yellow and blue are also the same colors used in the Indiana flag.

The council will likely approve the new flag at their meeting on Monday, March 14.