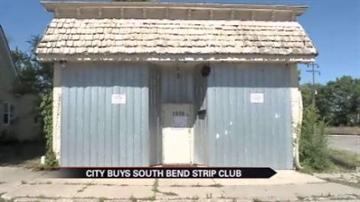 SOUTH BEND, Ind. -- The city of South Bend is buying a strip club for thousands of dollars more than the building's appraised value. The city says it will improve that part of town, but others question the purchase.

The city bought the building on Kendall Street and agreed to help relocate the strip club, Centerfolds, that operates there.

According to Valerie Schey of the South Bend Redevelopment Commission, the city is paying the building's owner $350,000.

"Which would include not only the purchase of the parcel, but costs to assist the owner in relocating and retrofitting a future location to accommodate his business," said Schey.

In other words, the city is going to use taxpayer dollars for a strip club.

"I'm very disappointed because those funds could have been allocated in other areas. It tells me that we have our priorities out of order; to be behind endorsing a strip club is not the direction that our city should be going in," said Reverend Cory Gathright.

Progress is a tricky thing.

Schey says they had to buy the strip club out to make way for tenants at Ignition Park.

But just a single tenant has moved into the industrial park since it was announced three years ago.

Schey says there are no others interested that she's aware of.

But the city hopes sooner or later there will be.

"Future tenants would be looking at the overall appearance and character of the site and make a decision to invest based on that," said Schey.

The Redevelopment Commission does not set the purchase price, they only approve the deal.

The city's community investment department is responsible for agreeing on the purchase price.