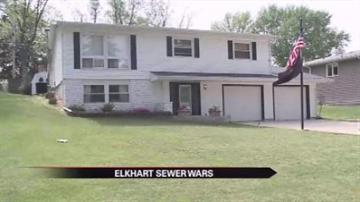 ELKHART, Ind. -- The City of Elkhart has notified residents who live along Valley View Drive, just outside the city limits, that it will disconnect their sewer services if they don’t sign the sewer compact.

"They're threatening every time you turn around. They can't talk human. So, they have to use this terror stuff.  Threat, threat, threat,” said Jon Nelson, Valley View Neighborhood Committee.

For 17 years, Nelson has been fighting the city of Elkhart's compact sewer agreement.

A letter from the county commissioners sent out Thursday indicates the debate could end within a month.

The letter says the city is within their legal rights to require a compact agreement and that county will not stop the city from shutting off sewer services to those residents who have not signed the agreement by June 2nd.

But Nelson is still holding out.

Both Nelson and mayor Dick Moore say there are still a few people who have yet to sign the compact.

Though neither could provide an exact number.

Nelson says there are already people who have abandoned their homes in Elkhart because the price was just too high.

"They have absolutely scared every-those who have signed into signing it. And 99 percent of them have fallen to that scare tactic,” said Nelson.

Mayor Moore says this ordinance with the residents on Valley View is a done deal.

He says they need pay their fair share of the sewer costs in lieu of taxes.

With this letter, the county agreed to let the city to come out and cut off the sewer lines as a last resort.