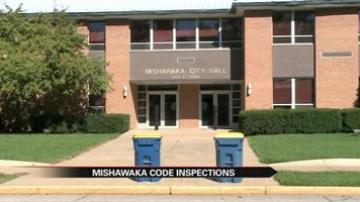 MISHAWAKA, Ind. -- The city of Mishawaka has proposed that building inspectors conduct fire code inspections, but the president of the firefighter's union doesn't like that plan. The union president worries the city inspectors don't have enough experience, but the city says they do.

After one of Mishawka's fire marshals retired this year, the city began looking for ways to work more efficiently. That's when they noticed something in the state codes.

"Out of the 13 of the ongoing fire inspections that the fire marshals look for, 12 of them deal directly with the Indiana building code," said Chief Dale Freeman of the Mishawaka Fire Department.

It seemed logical to simply shift fire inspection duties to the building department. That would free up the fire marshals for other things.

"These guys could mostly just do their investigative duties along with public education, fire extinguisher demonstration, and the like."

But not everyone likes that idea.

Monday night, the firefighters union president spoke out against that plan.

According to Hundt, Chapters 9 and 10 of the building and fire codes are identical.

He also said the building inspectors get yearly training making them just as qualified to conduct fire inspections as fire marshals.

The fire chief said he wouldn't allow this plan to move forward if he wasn't sure the building department is ready to handle the job."

"We're not going to take somebody out there and just say, 'Here, inspect this building off of the cheat sheet.' These people will be certified, they will be accredited before they do their first inspection and we will get the most safety we can out of everybody," said Freeman.

The president of the firefighter's union also claimed the fire department is two years behind on commercial fire inspections.

The fire department's Chief of Fire Prevention says that isn't true. They are behind on about 5 to 10-percent of business inspections, but those are small businesses without much foot traffic.

He guarantees high traffic public buildings are all up to date on inspections.