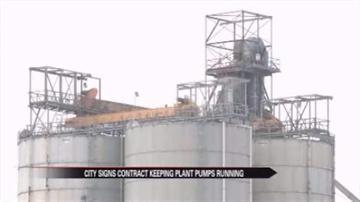 SOUTH BEND, Ind. -- The City of South Bend and the two liquidation companies that now own the ethanol plant have made an agreement to keep one of the pumps running, but only for six more months.

"Their initial stance was just to turn them off because they were not going to be here. They did not want to have to operate or maintain the pump, they also didn't want to have to pay for the electricity." explained Eric Horvath, Executive Director of the Department of Public Works.

The City is agreeing to pay $8,100 a month in electricity bills and $1,000 a week for security guards to man the grounds.

Homeowners in Rum Village are relieved, but some say that they are still worried because there is still no long term solution.

"We have moved from a Band-Aid to a cast being put on but I am still concerned that the cast will be removed too soon before the injury is healed," said Councilman Oliver Davis.

The liquidators say they are trying to get operators into the plant to get it back up and running.  But if that does not happen within the six month window, Calvert Street residents will be back a square one.