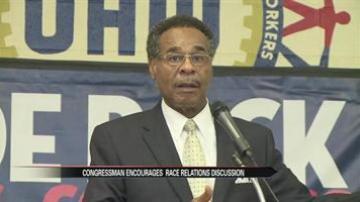 SOUTH BEND, Ind.-- Clashes and protests in Ferguson, Missouri have sparked a national debate regarding civil rights in our country.

The Chairman of the Black Caucus attended a local campaign event and talked about the events that have unfolded in his home state.

The funeral was held on Monday for Michael Brown, the teen who was shot and killed by a police officer in Ferguson a few weeks ago.

Missouri Congressman Emanuel Cleaver said the protests you see on television are proof that racism is still a battle that many communities are facing today.

Cleaver said, “You will not be able to fix a thing unless you know that a thing is broken, and if you don’t believe that there is a problem, then the problem will generally be ignored until it’s too late and that’s what happened in Ferguson.”

Cleaver said the military-style crowd control that was used in Missouri only fueled the flames.

He hopes that cities across the country will make an effort to discuss race relations before tensions lead to more tragedy.

Congressman Cleaver was in town to endorse Joe Boch in his congressional race against Jackie Walorski.