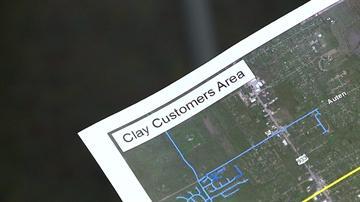 The Clay Township Board is proposing to add $2 to water bills to protect residents, in the past few months more and more people living in the township have become aware that they aren’t covered by any insurance protection in the event water lines near their homes break.  Tuesday’s meeting included a warning from the Arndts, a couple who had to pay $3,500 to repair a water line break 35-feet from their home.

"I don't know about any of you but that was pretty tough to come up with all at one time,” explained one of the Arndts.  “It's not something I can whip out of my purse and say OK, you want my $3,500, you can have it."

Many in Clay Township receive their water from South Bend Water Works.  Since the Arndts first presented their problem to the township board months ago, many have started becoming aware that, unlike South Bend water customers within the city, they haven’t been paying for insurance protection in their bills.

"It's a learning curve, quite frankly I've lived here for thirty-plus years and I didn't know about it," described Mike Dobson, a Clay Township Board member.  “I went home right after the Arndts did their presentation and looked at my own water bill and found that I don’t get charged water insurance.”

Paying two or three dollars in water insurance protects consumers from paying hundreds or thousands of dollars if lines break.  Dobson explained that complications from the purchase of Clay Utilities by South Bend Water Works in the 1970’s resulted in Clay Township customers not being charged for the insurance and until recently the potential problems went unnoticed.

“We’re making them aware of something that the city of South Bend has that they could provide to the unincorporated residents of Clay Township," Dobson explained.

Out of the dozens of people who showed up on Tuesday, not one person voiced opposition to the plan to add the cost of insurance to water bills.

"Obviously a two-dollar a month charge on a water bill for insurance is a pretty economical way to fix a problem," Dobson said.

Going forward Clay Township will hold another community meeting about the issue and attempt to get information out to residents informing them that they don’t have insurance and letting them know about the proposal to add insurance cost to their bills.

Clay Township officials are asking anybody who supports the plan to write letters of support for the plan and send them to Clay Civil Township.  If a majority of residents show support the plan will be considered by South Bend Water Works and state regulators who will consider adding the costs to water bills.