Cleaning up after train derails 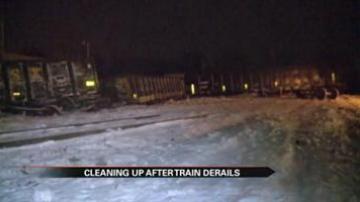 TONTOGANY, Ohio. -- Crews in Tontogany, Ohio, just south west of Toledo, are cleaning up after a train derailed on Main Street in their town square Monday night.

Officials with the sheriff's department say 18-train cars went off the tracks around 9:30.

None of the cars were carrying hazardous materials.

"They know that their emergency breaks kicked on so that could have happened after the train started derailing and when we found them further down the tracks they didn't realize at that point what had happened back this far," said assistant fire chief Bill Gase.

No one on the street or on the train was hurt in the accident.

Authorities say they do not know how long it will take to get the main road opened up again.