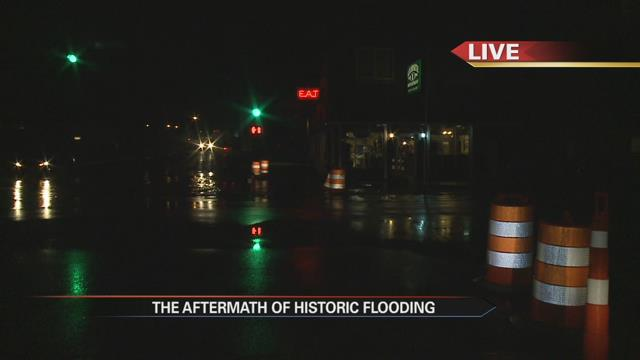 It has been 24 hours since a record amount of rain fell in Michiana. Many places on the south side of South Bend were flooded and damaged from all of the rain.

The area saw close to eight inches of rain from Monday into Tuesday morning. A sinkhole appeared on Fox Street just off of Michigan Street in South Bend. It was caused by all the rainfall and the sinkhole took away the porch from the front of a house.

Firefighters said on Tuesday morning they were concerned the whole house may collapse. As of Wednesday morning, the water in that area had gone down but there was still a lot of water present in the area of the house. The house was still standing.

The intersection of Michigan Street and Ewing Avenue continued to see a lot of water Wednesday morning. The water lingered on the road and sides of the road. The Kitchenette Restaurant is near that intersection and got up to four feet of water inside the basement. The flooding inside the restaurant damaged a lot of paper goods.

Clean-up crews worked all throughout the evening and into the morning to pump out the water. They had five pumps set up taking the water out of the restaurant.

Crews expect to cleanup and hopefully open the restaurant back up by Thursday or Friday.