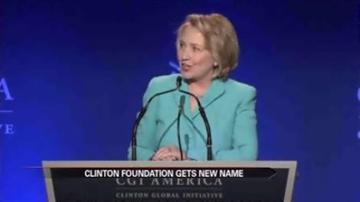 CHICAGO -- Bill and Hillary Clinton are keeping their foundation in the family.

Thursday, former Secretary of State Hillary Clinton was in Chicago where she revealed the new name for the foundation - the Bill, Hillary, and Chelsea Clinton Foundation.

Clinton said she will mainly focus on three areas at the organization: early childhood development, expanding opportunities for women and girls, and improving economic development all around the world.

"It is such a pleasure to be here in Chicago, participating as a private citizen, as a co-host of CGI and as a representative of what we are officially renaming the Bill, Hillary and Chelsea Clinton foundation," said Hillary.

The Clinton foundation was started by former President Bill Clinton in 2001.