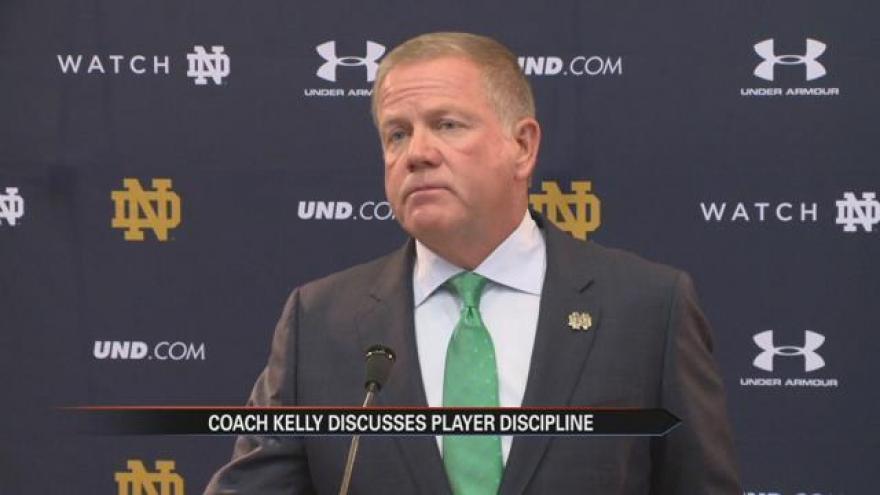 Coach Kelly explained Notre Dame's drug policy and talked about his decision to kick Max Redfield off the team while allowing the other 4 players who were arrested to stay avoid suspension and play in game one against Texas.

"I've never suspended a player for a game for a first offense in this instance," said Coach Kelly.

Coach Kelly says the university's athletic department does not suspend an athlete for a first time marijuana offense.

"Well we have that through our entire athletic program. That the first, you know, your first time is an educational process, in other words it's counseling and education and then you enter into that tracked program that you could have random drug testing so it's not just football it's the entire athletic department, our whole department is set up that way. I don't know how other programs are but we certainly consult and look at other like schools and I'm confident to say that most if not all are pretty much the same," Coach Kelly said.

Kelly says Redfield was a different matter because of previous disciplinary problems and the severity of his involvement in this current situation.

"Max was charged with the possession of a hand gun, that changed the whole situation so that's what caused the dismissal and as an upper classman not really living up to the standards that I've set. The other four guys you know we're talking about possession of marijuana and me dealing with that situation. So it was the handgun that was the game changer," Kelly said.

While Kelly says the athletic department will not suspend the other four players, they could face further discipline from the university's Student Affairs Committee.

They will receive reports on Tuesday.

To give you an idea of what these other four players could be facing, in January of 2007 Irish basketball player Kyle McAlarney was charged for misdemeanor marijuana possession.

He went in front of the school's Student Affairs Committee and they dismissed McAlarney from the university.

According to du Lac, the Notre Dame student handbook, use of marijuana or other controlled substances is considered a serious offense, punishable by dismissal from school.