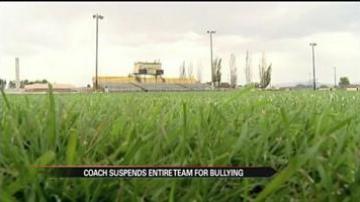 The Utah head coach says he got complaints about his players being disrespectful, bullying, and doing poorly in school.

He decided to suspend them all the week ahead of the big homecoming game to teach them a lesson. Instead of practicing all week, the team did community service.

"It's an honor to put on your school's jersey and I think sometimes we lose that fact, in this world of me, me, me," said head coach Matt Labrum.

"I wasn't part of the disrespect but I saw it go on just as much as everybody else. And I'm just as much at fault for not making it stop," said team captain Zach Roll.

Some of the new quotes in their varsity locker-room now include "Good character is more to be praised than outstanding talent."