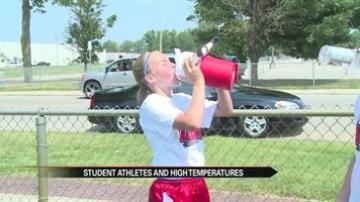 SOUTH BEND, Ind. -- When the temperature is so high, coaches of high school sports teams and organizers of summer camps have to take special precautions to protect everyone from the heat.

"For about an hour and a half," said player Jocelyn Valderrama.

But for every drill, there was a water break.

"When I saw the forecast for today, I think 91 is what I looked at, you cringe as a coach and you make adjustments," said Gray-Ber.

While on the field, the young athletes are his responsibility.

"It falls on us as coaches to make sure we are providing plenty of water breaks and giving the girls lots of rest," said Gray-Ber.

Gray-Ber says he treated the day as an extremely hot day, even though it didn't feel as bad as he thought it would.

"It could be 90 degrees out here but with this breeze, we are fine. But we've had other days where it has been unbearable almost in terms of trying to get things done in practice," said Gray-Ber.

Over the last thirteen years of coaching, he has noticed not everyone can perform on hot days. Everyone is affected by the heat differently.

"That's what we have to be aware of as coaches, when we might think that we are not doing an activity that's that serious, some players if they haven't been hydrating, then we have an issue," said Gray-Ber.

Gray-Ber says as a coach, he pays extra close attention to his athletes and reminds them that hydration is key before, during and after practice.