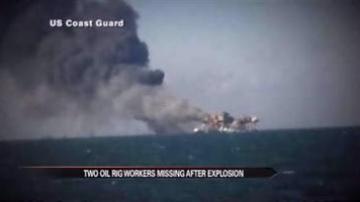 LOUISIANA -- The Coast Guard continues to search for two missing oil workers after an explosion and fire that ripped through a gulf oil rig.

The Coast Guard has units in the air and the sea trying to find the oil platform workers who went missing after an explosion on Friday.

This explosion has raised questions to the environmental impact of the spill. But the Coast Guard said the impact is minimal.

"The environmental threat as we know, there were 28 gallons that potentially were in that three inch, 75 feet long, which would equate to approximately 28 gallons of product," said Captain Ed Cubanski.

Authorities have not revealed the names or even the genders of the two missing workers.