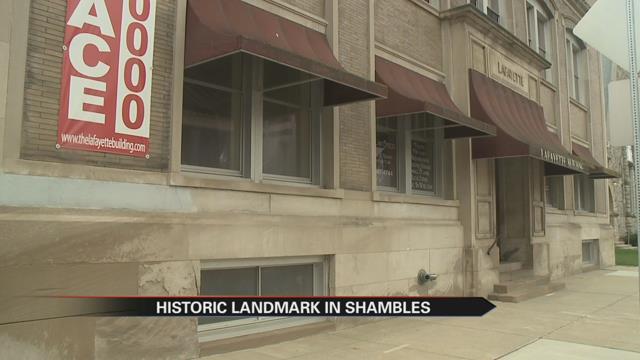 South Bend’s code enforcement is at its wits end with the owner of an endangered landmark.

City officials say years of neglect now present a danger to folks who live, work and worship near the historic Lafayette building.

“It would be a real shame to lose this building because it is one the oldest commercial buildings in the city and it is absolutely one of the most unique architecturally, especially on the inside,” said Elicia Feasel, executive director of Historic Preservation.

The building that stood the test of time since 1903 could be approaching the end of its lifespan thanks to its negligent owner according to the city’s Code Enforcement.

“We’ve had five hearings on the property over the past several years and he has not shown up or made any completions on the repairs,” said Randy Wilkerson, the Director of Code Enforcement.

Thursday, Code Enforcement held a hearing on the property at the request of the owner.

The problem is, he didn’t even show up.

“We can’t hold him accountable if he’s not here. That’s the problem. We need to talk to him; we need him to make these agreements with the city,” said Wilkerson.

He also owes $1.5 million in back taxes for the property and will also have to pay $250,000 for a bond ensuring he will make required repairs.

Code Enforcement is demanding the owner focus on the exterior first, although quite a bit of interior work is needed, too.

“I mean everyday that we go without having a roofing inspection; we just don’t know what’s going on up there,” said Feasel.

So Code Enforcement will continue to push before it’s too late.

“There’s going to be a point in time that this building is not going to be able to be saved, you’re talking then you have a greater cost to value,” said Wilkerson.

That cost could mean a demolition order by the city; an outcome no one wants to see.

“We’ve had maybe 12 to 15 people contact us outright wanting to buy the building, wanting to lease, wanting to renovate it,” said Wilkerson.

The Lafayette building was named one of the state’s most endangered historical landmarks back in 2015.