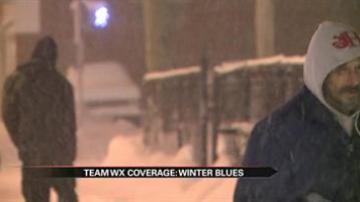 SOUTH BEND, Ind. -- It isn’t the flu, and it isn’t a fever, but it is an illness sending more people to the doctor this winter. It’s called seasonal affective disorder known to many of us as the winter blues.

“I walk to work. I ski. I love the cold. Northern Indiana!” said Patrick Mousseau.

Out of the people ABC57 talked to Wednesday, he is the only one.

It’s no secret it’s been one heck of a winter.

“I’m kind of sick of it. Mother Nature has not been nice this year,” Nathaniel Poe explained.

“I can’t wait until it starts warming up, it’s too cold out here,” said Corzell Smith.

Doctor Jennifer Knapp at Beacon Medical Group says while many animals go into hibernation during the winter, there’s a thought that genetically humans did too.

“What do we see as far as hibernation during the winter, well we want to sleep more, we want to eat a lot of carb heavy type foods. We tend to isolate more, we aren’t going out, being as social,” she said.

But she says it’s not the heavy snow and freezing temperatures that get us feeling blue, but the lack of sunlight.

She says some ways to treat seasonal effective disorder are with regular exercise or light therapy.

“I recommend a lot of times, light therapy with my patients. I think it’s a really easy way of getting treatment without putting chemicals in your body, but it’s just as effective as medicine.”

It works by sitting near a bright light that mimics outdoor light; people can use the treatment for free at Memorial Hospital.

And to put it in perspective the doctor says in sunny states like Florida, just about 1 percent of the population experiences seasonal affective disorder whereas in places such as New Hampshire 10 to 30 percent of people do.