Cold in the east, hot in the west: spring temperature disparity

NOW: Cold in the east, hot in the west: spring temperature disparity

While the Climate Prediction Center is forecasting cooler than normal temperatures for May in Michiana, other parts of the country are much warmer than normal. This major difference in temperatures started in April.

The western parts of the country saw temperatures anywhere from six to ten degrees warmer than normal in the past two weeks.

During the same time period in the eastern US, temperatures ranged from two to eight degrees cooler than normal.

Areas on this map in red and orange are the ones that saw the biggest warm up from normal, while areas in blue and purple are ones that saw cooler than normal temperatures.

While we have been bundling up with jackets to get outside, those experiencing the western heat were lucky enough to break out their summer attire.

On April 29, while it was 62 degrees in Michiana (three degrees below normal), it was a record setting 99 degrees in Las Vegas (sixteen degrees above normal). More cities across the west have been setting similar daily records, with some even seeing triple digit temperatures.

Unfortunately, going forward in Michiana, temperatures in our 10-day forecast are all well-below normal, and will stay mostly in the 50s. Hold onto your jacket a little bit longer! 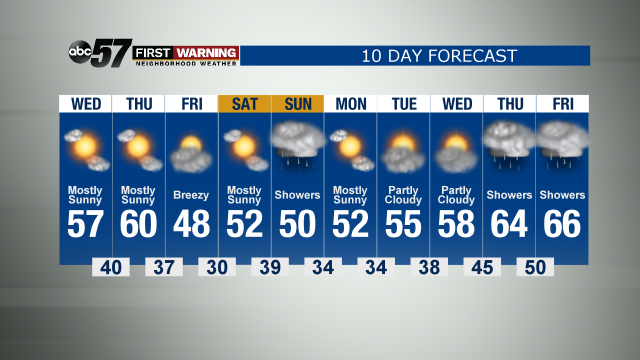