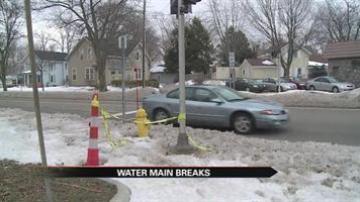 ST. JOSEPH, Mich. -- The extremely cold weather has caused a record number of water main breaks in St. Joseph, Michigan. The director of Public Works says since December there have been 42 water main breaks that have cost the city thousands of dollars.

Experts say the water mains are old and they can't handle the temperatures and the pressure anymore.

"A lot of people love the idea of build it, put it in the ground and forget about it, but the reality is it begins to age and it does have a finite life to it," said Derek Perry, Director Public works City of St. Joseph.

Perry says some of the cast iron mains under the streets are failing. They weren't designed to last forever.

"Some of the pipes in the system are over 50 years old," said Perry.

Perry says the water mains are 5 feet underground, which has never been a problem.

But this year's cold temps have frozen the ground much deeper and that's causing water main breaks left and right.

"The problem is the actual frost keeps getting deeper and deeper. Typically in January we have a thaw. That didn't happen this year so the ice gets closer and closer to the pipes and the ground gets harder and harder," said Perry.

In January, a water main broke under Main Street. Five million gallons of water and $27,000 later, the main was fixed.

Perry says finding the water main breaks has been the hardest part.

The water leaking from the water main may not surface at the actual location of the break.

Perry says the pipes are only getting older, so eventually the city will need a long term solution.

"How do we take care of the infrastructure we have? How are we going to replace it in the future?" said Perry.

Perry says they are working on a plan to replace the infrastructure, but it's extremely expensive and not happening anywhere in the near future.