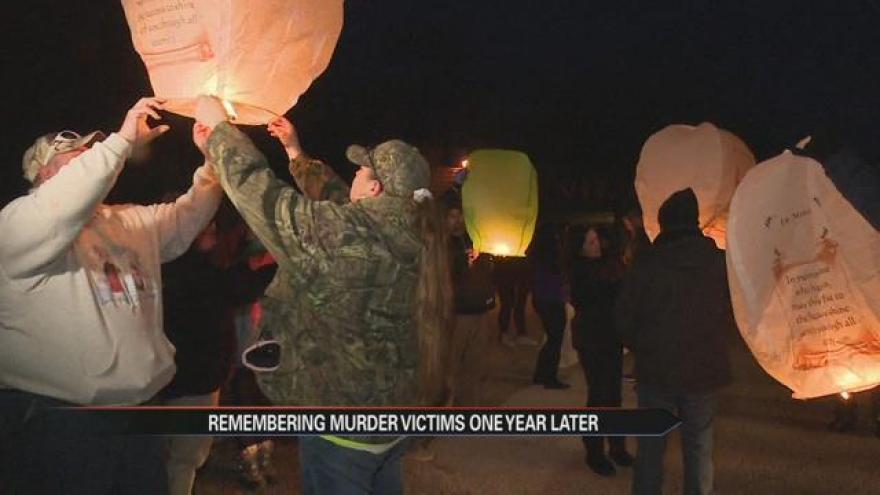 A mother and grandfather were murdered in their Coloma home exactly one year ago. Saturday night, Renee and John Mitchell’s family and friends remembered them on the anniversary of their death.

“I don’t want to relive it. I can tell you that,” said Renee Mitchell’s sister, Stephanie Kopaceski.

And yet, exactly one year later, Stephanie finds herself staring across at the Coloma house where she found her sister and father dead.

“I never thought I could walk into something like that,” she said.

She discovered a double murder.

And Alex Perez, the father of Renee’s children, Luna and Nova, is being charged with the crime.

“You took my father and my sister’s life and you took the girls, so be a man and say hey I did it and suffer the consequences. That’s all I ask,” said Kopaceski.

Perez is currently awaiting treatment at the Center for Forensic Psychiatry after being declared incompetent to stand trial in June.

But Saturday’s memorial was not about him.

It was about honoring the memory of lives brutally taken far too soon.

“My sister…I was going to say she definitely was a lovely person,” said Stephanie. “My dad was a hard-working man, and he loved to help everybody.”

The Kopaceskis need support now more than ever. It’s been more than a year since they’ve seen their nieces, and they’re battling for custody every day.

“We’re not giving up. We’re going to fight till the end,” said Stephanie’s husband, Tim Kopaceski.

In the meantime, they promise Renee and John to light lanterns so their memories will never extinguish.

“Just keep it up you know each year until we can’t do it no more,” said Stephanie.