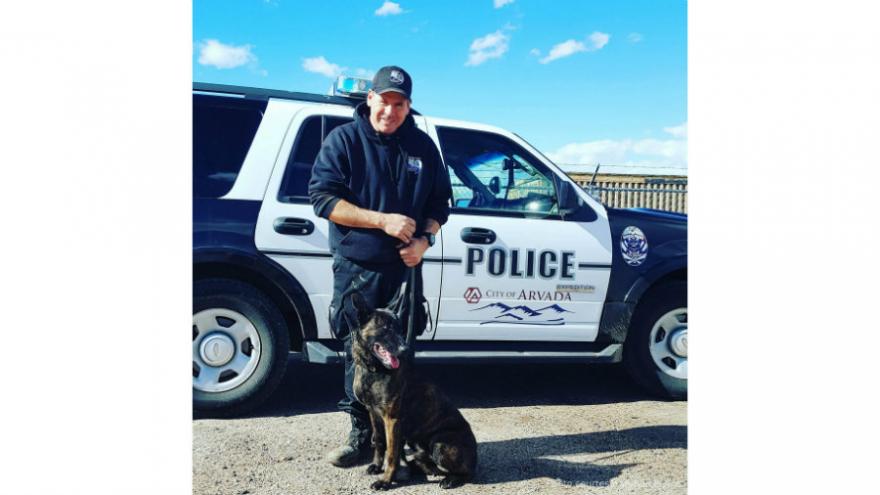 (CNN) -- Officer Brian Laas remembers the scene with vivid clarity -- it was earlier this fall, and he, along with his four-legged partner Rudy, had been called to a home in suburban Denver with a warrant for the arrest of one person who lived there.

Inside, the Arvada Police officer found a home so disheveled, it was difficult to take a single stride without stepping on the piles of clothes, food, trash and dog feces strewn across the floor. Rudy was there to sniff out the suspect. He found her hiding at the back of the garage, under piles of clothes and trash that nearly reached the ceiling.

"It's a condition that most people couldn't imagine living in, to work through that to find somebody," said Laas.

There were also used needles, knives and drugs -- loose narcotics -- scattered amongst the filth and on the furniture.

Situations such as this can be dangerous for officers, and especially for their canine partners. That's because the drugs police are finding on the street -- heroin, fentanyl, carfentanil and others -- have become terrifyingly potent. So potent that merely touching them or inhaling just a few grains can be deadly for both humans and dogs. The risk of inhalation is especially high for police dogs, because they use their noses for a living.

"When these dogs go to work ... they sound like a little vacuum going -- all that inhaling, so all it takes is a few of those grains (of drugs)," Laas said. "You're constantly afraid."

Rudy has had scary interactions with drugs before -- Laas is always ready to rush him to the nearest veterinarian. But thanks to a new statewide initiative, he may not need to. Colorado is aiming to equip all 120-plus police canine teams there with Narcan.

The nasal spray carried by many first responders to reverse an opioid overdose in people, is now being carried by police officers to use on their own dogs.

"We're still trying to be cautious, it's just giving me the insurance that if there's (drug) exposure, I have an immediate response, which then gives (Rudy) a better chance of survival," he said. "It's definitely something that I am very grateful to have."

Laas is also the president of the Colorado Police Canine Association. He says Colorado officers haven't had to use Narcan on dogs, but they're now trained on how to use it. It's just like humans, but with a few extra precautions.

"It's very similar to a human that you would put it through the nose," he said. "Of course, we have to put them in a muzzle because when they do come to, a lot of times they can be very aggressive and lash out thinking somebody hurt them, and so their response can be to bite somebody."

Last year, the Drug Enforcement Administration put out a nationwide warning to police about the dangers of fentanyl for officers and dogs. In October 2016, three K-9s in Broward County, Florida, executed a narcotics search warrant and were rushed to a vet after their handlers noticed overdose symptoms, according to the Broward Sheriff's Office. They were listless, disinterested in water or attention and weren't able to stand. Two canines were treated with fluids and another with Narcan. All three were able to return to work the next day, and none experienced lasting effects.

Laas is aware of the risks. Aside from the potential loss of an animal that he refers to as his child, police dogs are expensive -- it can cost upward of $30,000 for a single fully trained animal, he said. Narcan costs $37.50 per dose.

Colorado Attorney General Cynthia Coffman is behind the initiative. "Being a dog person, it was certainly a no-brainer to me that we needed to do this," she said.

According to Coffman, half of Colorado police canine units have Narcan already, and she hopes all will by the end of the year. She quotes the total price tag of the initiative around $10,000 -- a figure she says pales in comparison to the cost of losing an expensive police dog.

"It's a small price to pay if you save the life of a human being or a dog," she said. "Other jurisdictions have lost canines to drug overdoses ... I'm just happy that we've been able to act in advance of it happening with one of our Colorado canine officers."