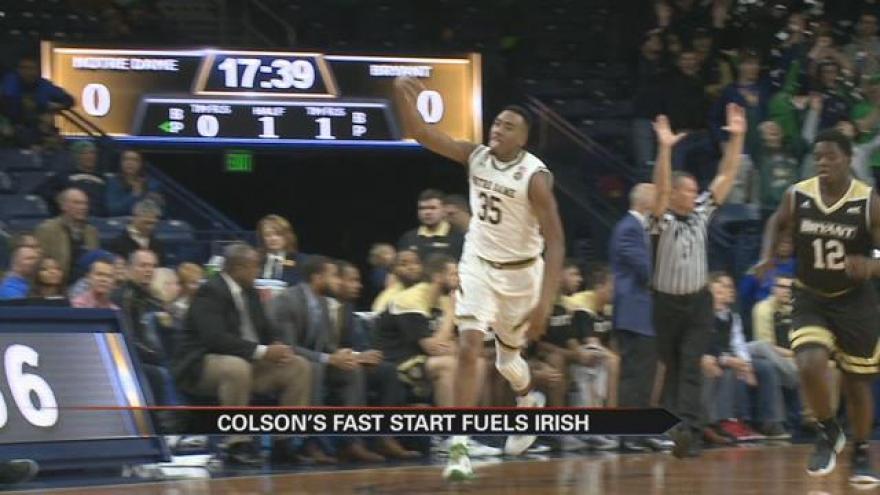 At six foot five, Bonzie Colson is considered by most to be undersized at power forward, but many are finding out he's becoming one of the toughest matchups in college basketball.

Colson has taken the college basketball scene by storm early this season averaging 18.1 points and 10.7 rebounds per game. And after the departure of star forward Zach Auguste, Colson is seizing his opportunity.

"It's great to see you know all the hard work he's put in especially on his body pay off and the things he's doing for us right now are great for us," V.J. Beachem said.

Colson's size presents a unique weapon for the Irish given his ability to be effective all over the court.

"Obviously a little undersized for the most of the guys guarding him or they're going to put a guard on him and they can't be physical with him so just a real big matchup problem," Vastoria said.

But Bonzie's biggest weapon is the emotion he plays with that he says fuels his play and sparks his team.

"It's huge but I'm trying to control it now, stay composed and keep the energy at a great level at all times and trying to continue to spark guys and motivate guys to play up to expectation.and keep them involved and their head right," Colson said.

From spark plug his first two seasons to go to player this year, Colson continues to impress all that surround him.

"I'm extremely confident that when he has the ball, that most likely he's going to get some points on the board for us," Vastoria said.