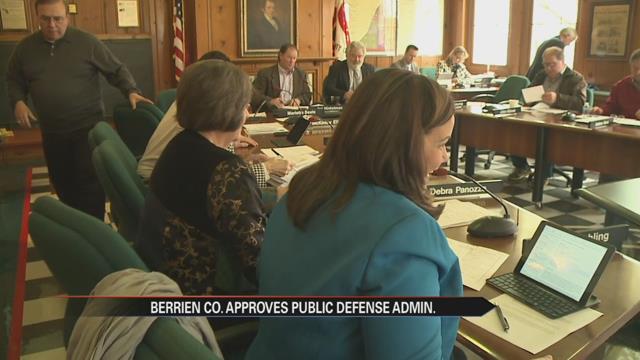 On Thursday Berrien County Commissioners added an administration position that would provide oversight to over 20 court appointed attorneys.

As of now they've hit a bit of a snag. Commissioners are at odds in regards to whether the position should be full or part time.

Elizabeth McCree said, “If it is approved today to have a position of a public defender, then that needs to be a full time position.”

Some citizens feel a part time leader of public defenders is irrational in a county where 85-percent of cases require a court appointed attorney.

The administrator for indigent defense would manage the contracts with the county as well as manage all the public cases.

As an attorney, McCree said that's too much work for a part time person.

McCree said, “Other standards for both state and federal requirements need to look at the particular case load of each individual attorney even if they worked for a felony defense LLC or any other firm.”

Several people took to the podium because they think a part time leader of public defense would only provide partial oversight.

Lester said, “And avoid sounding like money is the driving force instead of justice, rather than justice for all!”

Commissioner Bill Chickering said they are still working to develop the position and collect data.

Chickering said, “The commission voted 7 to 5 to support the concept that if we can find an appropriate lawyer to serve as indigent leader that would be a possible part time position as we learn the next year what type of delivery system we really need.”

Chickering said he wants to use 2016 to study other counties to understand how they utilize an indigent defense office.

Chickering said, “The way our contracts work, we have defense attorneys who are assigned to different court judges now. this new person would administer and support those people in those roles and at the same time be studying what they do, the case volumes, the amount of time they’re required.”