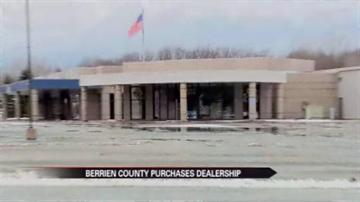 BERRIEN COUNTY, Mich. -- A former car dealership and 48 acres of land surrounding it will become a one-stop shop for the Berrien County Health Department and a brand new Animal Control facility. Berrien County officials approved the purchase, but it’s not sitting well with taxpayers.

The money would come from the delinquent tax revolving fund.

Taxpayers who showed up to the meeting were not in favor of the project.

"They are spending money the reserves of the county, the tax reserves. This has never been done before,” said Donald Ryman.

County administrator Bill Wolf says the county plans to consolidate the five different health department facilities that now exist into a single location. They will also build a $2.8 million countywide animal shelter on the surrounding property.

"Which we would bring up from Berrien Township up to a more accessible space right on Napier right next to I 94,” said Wolf.

The county says it got a deal on the land. They say they paid close to $2 million less than what it was worth.

Two of the commissioners sided with those who spoke out and voted against the project.

"I just don't see how this will help us at all in the south county,” said John Klimek, District 12.

Seven of the commissioners voted in favor of the project.

"At this time the board has approved the purchase of the property that will certainly go into a period of setting up a closing etc. for that,” said Wolf.

This project is just in the beginning stages. It could take up to 2 to 3 years before everything is said and done.