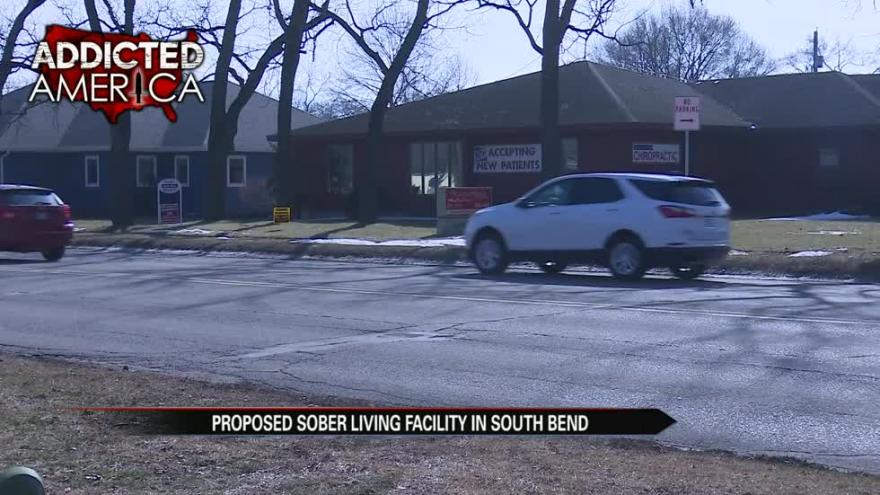 SOUTH BEND, Ind. – The South Bend Common Council once again delayed a rezoning vote at its Monday night meeting that, if passed, would allow a proposed sober living facility to open on East Jefferson Boulevard.

CHOICES Recovery helps people struggling with drug and alcohol addiction. To continue its mission, CHOICES wants to turn a chiropractic clinic in the 2600 block of East Jefferson Boulevard into a sober living facility.

But the proposal faces some push back from concerned neighbors and now another delayed vote.

CHOICES said people living in the facility would transfer there after finishing inpatient treatment. The facility could house up to 20 people who would stay for an average of 90 days. CHOICES explained the facility would allow patients to continue their care in a supervised environment and give patients the option to start rebuilding their lives by going back to school or work.

Those against the facility worry that it would decrease property values.

“When you tell someone, ‘Hey I’m an addict’ or ‘Hey I’m an alcoholic’, your family, your friends, your work, some of those people will put a scarlet letter on your chest and look at you differently for the rest of your life and you know that’s very unfortunate,” said CHOICES Recovery Executive Director Brandon Adolf. “I think we all need to work very hard to try to help change that and if we don’t, these people are going to continue to not seek the help they need, and they’re going to continue to lose their lives.”

At Monday’s meeting, several people, including St. Joseph County Sheriff Bill Redman, said a facility like this would help the community.

In an interview prior to Monday’s meeting, Adolf said the inpatient facility just two blocks away has never had an issue since it opened more than four years ago.

Adolf said there’s a dire need for housing like this in the community.

“A lot of our patients are normal, everyday, hard-working citizens,” said Adolf. “Just because they’re suffering with the disease of substance abuse doesn’t mean they’re less than anybody, doesn’t mean they’re a second class citizen. They deserve the treatment they need.”

Chris Santiago, a former CHOICES patient who is now sober and works for CHOICES, said housing like this can make or break someone’s recovery.

Santiago has struggled with drug and alcohol addiction for years. Ten months ago he enrolled in and successfully completed CHOICES’ program. He now works for CHOICES as a client service and behavior intervention specialist.

He hopes the common council eventually rezones the proposed site.

Santiago said it’s difficult for those in recovery to return home since that’s often where the addiction started. He added other housing options don’t always include access to resources that help with recovery. Additionally, Adolf said sober living facilities, like the proposed one on East Jefferson Boulevard, are often in states like California and Florida. He said it may not be financially possible for patients to go to those facilities. He added they could have other restrictions, like probation, which prohibit patients from traveling that far for treatment.

“It’s kind of good to have one near where you go through treatment because you build bonds with these people,” said Santiago. “If you’re all working together toward the same goal and then you’ve got a safe place to go to afterwards, it kind of gives you a little confidence. It makes you feel safe. You already know some of the people there and you really start off with a leg up.”

Santiago believes that if he lived in a sober living facility he may not have broken his longest period of sobriety.

The vote is rescheduled for March 11.

CHOICES said if the request is denied, they will look for another site.

Anyone with any concerns about the facility is urged to contact CHOICES.