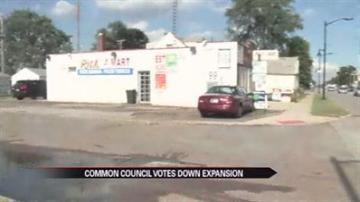 SOUTH BEND, Ind.-- A $600,000 upgrade at Rick’s Mart needs some tweaking before it ever goes into action. Common Council members voted against the proposal 6-2, saying there's just too many safety concerns with adding gas pumps in front of the store.

"If you look around, all your major retailers in the area are putting gas pumps in. That's the thing of the future," said Hervert Miller, assistant manager, Rick's Mart.

Neighbors say the gas pumps aren't needed and they're worried about crime.

"A gas station really isn't an additional asset to our community, simply because we have several gas stations, but we don't have a good community mart," said Wendell Johnson, against adding gas station at Rick's Mart.

Rick's Mart doesn't take up much space on the corner of Western Avenue and Kenmore Street. Rick took over the "Munchie Mart" in 2010, and since then he's made friends with the community.

"Rick has helped my family on the most struggling times," said James Carter, in support of expansion. "Like didn't have food in the house and I got younger sisters and I can go to Rick and he'll provide for my household."

The mart's original plan was to expand towards Falcon Street, add some gas pumps and improve the convenience store. Now it's back to the drawing board to see if the council will approve an expansion that cuts out the gas pumps, adds in some more healthy food options, and cuts out paraphernalia that kids could get their hands on.

Until then-- neighbors like Johnson consider tonight a victory.

"I've got grand-children that are coming over to visit with me and i don't want them exposed to that kind of atmosphere," said Johnson.