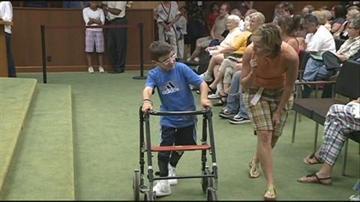 K.J. Anderson may not be able to do the things other little boys can, but that doesn’t seem to stop him from enjoying them. He, his mother Molly, and dozens of other families stood before the South Bend Common Council Monday night asking them to consider spending money on a proposal that would lead to the creation of a park for special needs children.

As he walked away from the podium with the help of a walker, K.J. looked confident, his mother proud and emotional. They did not beg, they simply asked to have access to the things other children have access to, and the ease at which to use them.

It seems like a simple request, one that some say should have been accommodated by now. But the reality is Indiana is the only state in the mid-west without a Miracle Park designed specifically for children with special needs.

In May, Mayor Steve Luecke brought a proposal to the council that would spend $1,000,000 on planning, purchasing land, and improving infrastructure for a Miracle Park. It was slated to sit on the land southeast of Olive and Nimitz Parkway.

But as the city began looking at the costs to improve infrastructure in the area, there was a problem. The costs of improvements were coming in much higher than anticipated and the cost of the park rose significantly.

Just after 5:00 p.m. on Monday, the mayor asked the Personnel and Finance Committee to reduce his request from $1,000,000 to $200,000 that could be used to pay for planning for a new location. The request was a difficult pill for some council members to swallow.

At least one member was upset the mayor would bring the project to them without specific details and costs laid out for review. Some members of the community agreed with the position, and felt the council needed to have more details before agreeing to write a blank check to the city.

Republican candidate for Mayor, Wayne Curry, agreed with the members of the council who sought more transparency. “When the city comes up and asks for $200,000 without any kind of a budgetary group of numbers…. And then even at the end when Mr. St. Clair said well it may not even cost $200,000 it might be less. Well if it might be less, it might be more… it doesn’t really sound like the city knows what it’s going to cost,” said Curry.

However, some council members said they felt comfortable without the details and trusted Phil St. Clair, Director of the city’s Parks and Recreation department. Community members like Anderson felt the same. “The projects we’ve done in the past with Phil St. Clair and the parks department have been unbelievable. Especially for those of us who have children with special needs,” said Anderson.

In the end, trust won out over the threat of a precedent on how the city conducts business. The council voted five to three in favor of spending the $200,000 to pay for consultants and planning for the proposed park.

After a short recess the council tackled the next big item on the evening’s agenda; the future of animal care and control in South Bend. Again, dozens of people spoke in support of a proposition put forth by the mayor this evening.

Having run out of time during committee meetings, council members heard the details of the mayor’s proposal to have them support a request by the redevelopment commission to use an additional $400,000 in tax increment funds to pay for a new Animal Care and Control building.

There had been a call from Councilman David Varner to merge the existing operation with St. Joseph County’s operation run by the Humane Society. That resolution had been tabled until August 28.

Some members of council were wary of getting involved at all since the council does not have any authority over how TIF dollars are spent. Legally, that financial decision is solely up to the redistricting committee for that district.

At the committee meeting prior to the public meeting on Monday, both the mayor and several members of the council were in agreement. The decision was not a financial one; rather it was a policy decision. Should the city of South Bend be in the animal care and control business, or should they outsource the job.

As midnight approached Monday, they still had not come to a decision. Public opinion had been given on both sides, though the one in favor for the resolution was represented with a far greater number of supporters.

Reverend Timothy Rouse holds an at large seat on the council. When council members had an opportunity to comment, he expressed his concern about the situation. “If the council would have voted it down, I would have had some problems with that because it really was not under due diligence, it really wasn’t under our call in the first place,” said Rouse.

The vote to support the redevelopment committee’s request to spend an additional $400,000 on a new building for Animal Care and Control was definitive. Only councilman Varner voted against the resolution.

Monday night’s action by the council sends a clear message to Varner that his tabled proposal of consolidating the Humane Society and Animal Care and Control services together has no traction. Sources say he will likely pull the proposed resolution from consideration before the August 28 public meeting.