Community comes together to pay respects to Jamie Middlebrook 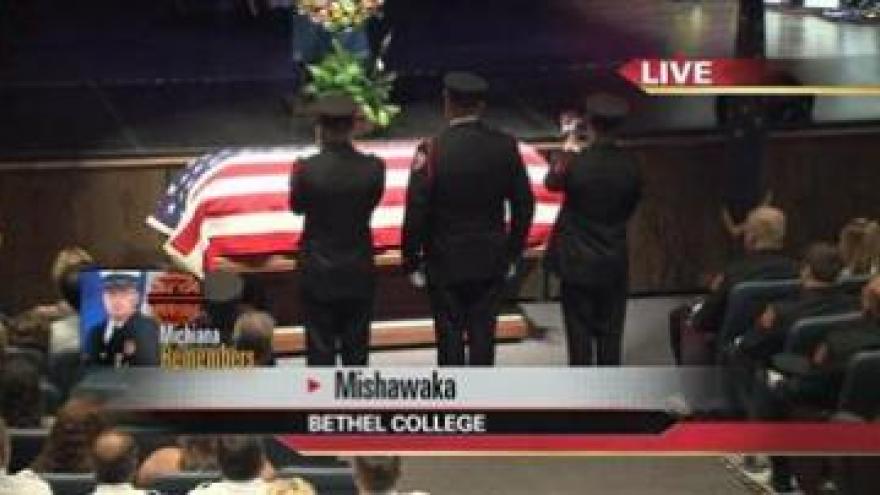 
He died in the line of duty August 5.


The Fraternal Order of Police says 850 public safety members and 100 family members were in attendance at the funeral.


There were approximately 160 emergency and fire vehicles parked outside the service.


Before the service, hundreds of firefighters and other first responders filed in to the auditorium.


After the Pastor welcomed everyone and spoke, a video montage of photos was shown while New Song by Audrey Assaud was played.


"When I think of him I think of husband, son, brother, friend, assistant chief, professional. He brought such integrity and such heroism to all of your careers. He made all of us a better, better person. And what I know is this - I know we will see him again. I know he is with Pastor right now and the good Lord."


After Donnelly, John Hill of the Indiana Department of Homeland Security spoke on behalf of the governor.


"As I spent some time this week reviewing Jamie's training records, I was so impressed with the level of training that he sought to improve to serve his community. He didn't do this because he was getting a paycheck. He did it because he wanted to better himself to serve the needs of others. Jamie protected us in this area of the state. He defended us. He watched out for his community and made us all stronger by his service."


"Jamie impacted my life on a lot of different levels. I came into the fire service, he took me in and taught me the right way to do things. He showed me how to be strong, be brave and to be there in somebody's time of need. His time of need is now. We stand here with our thoughts and prayers over Jamie, we show him how much we love him, how much we will continue to love him and how much we will miss him. I'd like to thank you for sharing Jamie with us. He was a huge part of your life and a huge part of ours."


After Schwizer spoke, a video montage of photos was shown while Brad Paisley's All In was played in the background.


Finally, the pastor ended the service and the firefighters and guests filed out of the auditorium.


Middlebrook's flag-draped casket was placed on a fire truck for his final trip to New Carlisle.


The procession will stop at the fire house for his Last Call, then will continue on to the cemetery.