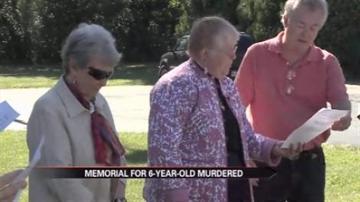 SOUTH BEND, Ind. -- Some pray, others mourn. It's their way of recognizing the wounds Shirley Mundia's family are living with.

Mundia was just six years old, and a recent kindergarten graduate of Veritas Academy, when she was stabbed to death by her own father, Edward Mwaura.

"This is more difficult than a lot of them, because you've got a young child that was murdered by a parent," Michael Elliot, vigil organizer, said.

It's why he decided to hold a vigil, the second one for little Shirley.

The only survivor from the brutal domestic dispute in the Irish Hills apartment is her mother, Lucy.

She is healing from stab wounds, but the emotional loss will likely take years.

"People are gathering this evening in honor of Shirley and for her mother to pray for both of them, and show that the community is concerned about what's going on in terms of violence."

They hope the community will see the pain, and the innocent lives lost from senseless violence.

"It helps bring closure sometimes for the family."

This circle of people can only do so much. Now, they want the Michiana community to join them and make a change.