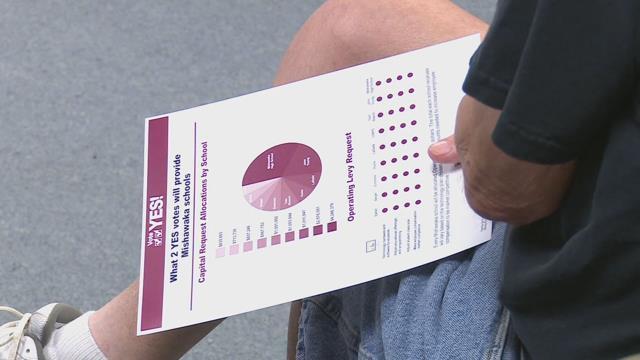 The ‘Our Children, Your Future’ political action committee is urging people to vote twice for two referendums on November 8th. They hosted a town hall Thursday night to promote it.

“We are the Mishawaka cavemen, and some of our schools still operate as if we’re knocking rocks,” said Mishawaka School Board Secretary Holly Parks.

“I’m totally for them,” said Sandy Arnold, a Mishawaka resident.

She’s totally for the PAC’s two referendums—a capital project and an operating levy.

“The operating levy for one to bring new technologies, new programs for the students and the teachers, to regulate class sizes better, to do teacher compensation,” said Parks.

Overall, if the referendum is passed, the Mishawaka City School system will take in an additional $1.8 million each year for the next seven years, and $13 million for the capital project payable over 15 years.

Some residents say the tax hikes don’t phase them.

“I think it’s necessary. I have grandchildren now in the Mishawaka school system. My kids were in there, and I think it’s something that we need,” said Mishawaka resident Richard Badeline.

Mishawaka needs it, because property values are low.

“We’re assessed very low, and we need to raise the assessment values of our homes, and a depreciating school isn’t going to do that for us,” said Parks.

“I don’t have any children, but someone paid for me to go to school, so I need to pay it forward,” said Arnold.

The Mishawaka Schools superintendent was there, too, and he said that more people are renting, so their kids aren’t staying in the school system.

This PAC believes if they improve the system, people will want to stay, and they may become homeowners instead of renters, in turn helping the greater Mishawaka community.