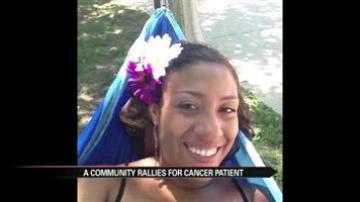 NILES, Mich. -- A Niles woman is now facing her third battle with leukemia. Friends, family and local businesses are showing their support and are helping raise money for her fight.

Storefronts in downtown Niles are lined with decals to raise money for Lindsey Cloutier's fight against leukemia.

And many places are selling wrist bands to show support for the cause.

Her supporters have already raised thousands of dollars.

those who know Lindsey best call her a fighter. she's now facing her third battle with cancer-and she's not giving up any time soon.

"Her attitude has been great. She's a fighter and she's going to do a really great job and hopefully beat this thing," said Shelton.

Shelton's family owns Shelton's Farm Market in Niles. They have already raised more than $2,000 for Lindsey.

"He said we'll donate a couple bins of apples for our customers and our customers can give a monetary donation, take as many apples as they want and all proceeds will go to Lindsey," said Shelton.

Those apples raised more than $1,000 in three days.

Lindsey's family members aren't the only ones pitching in to help.

"Everyone downtown knows who she is. She's one of those really sweet people when you walk in the door you're happy to see her," said Dayna Amster, owner of Olfactory Hue Bistro.

Amster is a friend of Lindsey's family.

In the past, she has hosted benefit dinners to raise money for different causes--and as soon as she heard the news that Lindsey was sick again-she wanted to find a way to help.

"I felt like since I had done it in the past maybe I would have something to offer, and a lot of benefits, I mean everyone has to eat," said Amster.

Lindsey's supporters say they'll continue to rally around her.

"She doesn't sweat the small stuff, she's got a very positive attitude and I just know that she's going to come out of this thing and be stronger than ever," said Shelton.