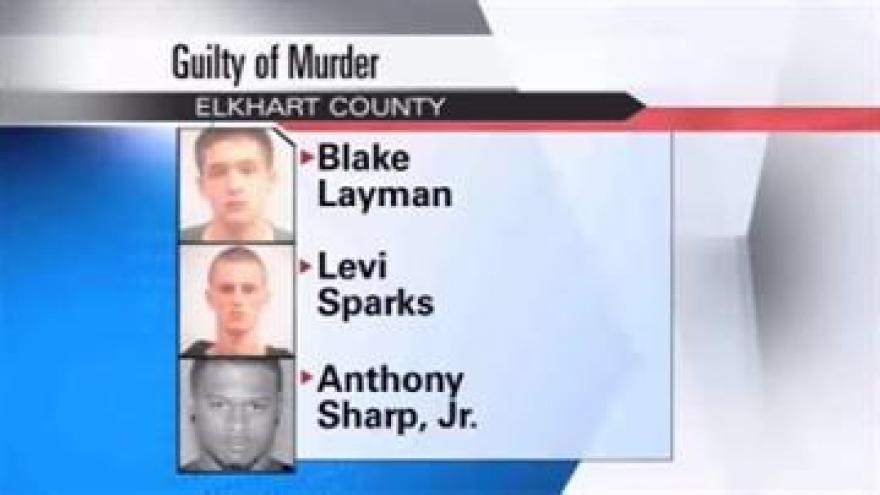 ELKHART, Ind. -- Three Elkhart County teenagers were found guilty of murder Thursday night even though none of them fired the shot that killed their friend.

The boys broke into a Frances Avenue home in October. The owner pulled a gun to defend himself and shot and killed Danzelle Johnson.

The guilty verdict is sparking emotional reactions on both sides of the aisle.

The Goshen Boys and Girls Club is a place where kids can be kids.

"A lot of our world today has robbed kids of childhoods and that's one thing we try really hard to do," said Adrianne Penner, Director of Education at the Goshen Boys and Girls Club.

Like many people in the Elkhart community, the verdict has affected her deeply.

"I don't know enough about Indiana laws to be a judge of the verdict and the case but it breaks my heart to know that these boys are going to go to prison for awhile," said Penner.

For Blake Layman, Anthony Sharp Junior and Levi Sparks, any hope of remaining childhood disappeared with the guilty verdicts.

Each one faces a minimum of 45 years in prison for committing the burglary that led to the death of their friend Danzelle Johnson.

Many in Elkhart are shocked, especially those who work every day to try to keep young people on the right track.

"Everything we do here, impacts our community with our kids it impacts their families and so on. And I think that's one of the things this case has really-- in a tough way, been a reminder that we're all a part of a community and that what happens at that courthouse down the street impacts us here. It impacts our families and our kids," said Penner.

Penner says the focus should be on helping the community move forward.

Elkhart County prosecutors held firm that the teens needed to be held accountable for their actions and encouraged the jury to make their decision without prejudice towards the boys' ages.