Community support may keep Cassopolis Village park from being sold 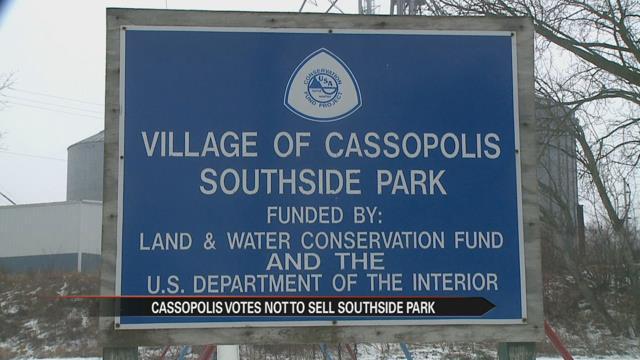 After a strong showing of support from community members at a council meeting, Southside Park in Cassopolis Village may not be sold.

On Monday night, 15 Cassopolis Village residents attended the village council’s monthly meeting, and some voiced their concerns over the possible selling of Southside Park.

“If the community loses one more thing for the children, the children suffer that much more,” one resident said.

“There are no places for the children to go on the south side,” another resident said.

“I just want us to have a nice park where everybody can go,” a third resident said.

Southside Park became the topic of conversation at Monday’s meeting after it was revealed the village council was considering selling the park to nearby agricultural business Community Mills.

“There is more support out there than what I had originally imagined,” Cassopolis Village resident William Curry, who wants the park to stay open, said.

“We usually have one or two [residents come],” McGrew said.

Southside Park quickly dominated the conversation, with residents pleading with the council to not sell the only park on the south side of the village.

“There’s certain things being mentioned about the park that we don’t really have access to that information,” Curry said during the meeting.

When asked last Friday if she thought the vote to sell Southside Park would pass, McGrew said, “That is the likely outcome.”

But at Monday’s meeting, the vote was struck down as four council members voted no and only two voted yes to selling the park.

“A couple of our council members have changed their mind within the last week,” McGrew said.

A new vote will be taken at the council’s next meeting on February 8.

“I’m a little more optimistic than I was before I came to the meeting,” Curry said.

But Curry added that the work of village residents is not over yet.

“Right now, the job is to get some people out there and get information to them about the park,” Curry said. “And so, I’m going to have to step up my game and get out and talk to some people.”

One other point discussed at Monday’s meeting was the issue of water running off Community Mills’ property, down a small hill and onto the park’s basketball court.

Curry and a council member both expressed frustration with the problem, saying it’s been happening for years and hasn’t been fixed.

Despite the discussion, no representatives for Community Mills were present at the meeting to engage in the dialogue.

The council will meet next on January 25 at 6:30 p.m. at the council hall for a workshop that residents are invited to.