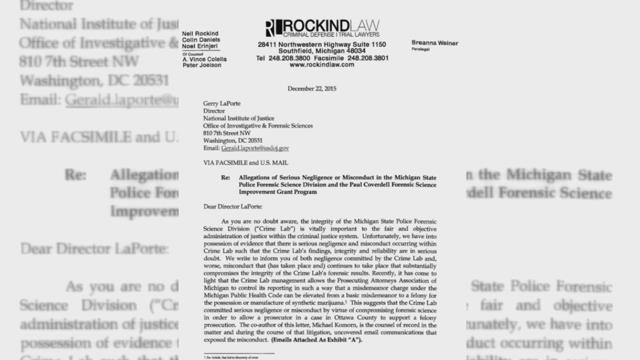 Several attorneys have filed complaints against the Michigan State Police forensic division over allegations they have misreported marijuana and synthetic marijuana tests.

It's a story that could be affecting people in Berrien County because all substances that are confiscated in Southwestern Michigan are sent to those labs.

An official with Michigan State Police said they are not investigating the complaints at this time.

In 2013, MSP changed the way they characterize THC, a chemical found in marijuana, and they said the way they do it is following regulation, but an attorney feels differently.

Neil Rockind said, “It was simply a political decision that was made and it was made with the input and and influence of the Prosecuting Attorney’s Association of Michigan.”

Rockind Law Firm is based in metro Detroit, and this issue surfaced from a local case in that area.

Rockind along with several other attorneys filed complaints on Tuesday. More information can be found here: http://www.rockindlaw.com/complaint-against-the-michigan-state-police-crime-laboratory/

Rockind believes people could be serving higher sentences than what they actually deserve.

Rockind said he has email evidence which  suggests that this new marijuana reporting system is politically motivated.

He said the Prosecuting Attorney’s Association of Michigan played a part in initiating the new reporting process.

Michigan State Police Public Affairs Manager Shanon Banner said they are following the rules of science and the complaints are bogus.

Banner said, "After this discussion period, the decision was made to begin using the phrase “origin unknown” for samples where the source of the THC could not be scientifically proven to originate from a plant-based material, e.g marijuana. it should be pointed out that “origin unknown” does not mean the sample is synthetic THC; it only means the lab did not determine the origin and the source of the THC should not be assumed from the lab results."

The attorneys filed these complaints with the National Institute of Justice because the attorneys said federal grant money is involved.

Several years ago a grant worth roughly $236,000 was given to the forensic science division at MSP to help expedite testing results.