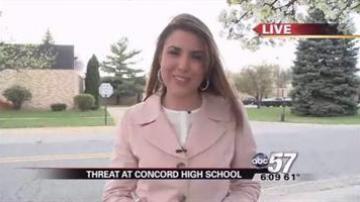 DUNLAP, Ind. -- Another threat is causing increased security at a Michiana high school!

ABC57 News talked with Superintendent Wayne Stubbs on Tuesday. He told us that Concord High School in Elkhart had increased security on Tuesday because of an alarming note found in the boys' restroom on Monday.

Superintendent Stubbs said that staff immediately contacted the Elkhart County Sheriff's Department after finding the threatening note. The resource officer assigned to the school is investigating the situation.

As a safety precaution, students could only use four entrances to the school on Tuesday where it normally has six.

There was a school resource officer at each entrance. Officers searched students' book bags before allowing them to come into the school on Tuesday. Extra police were on duty at the school all day.

Superintendent Stubbs said that the note was fairly unspecific, but said that it was threatening enough to be taken seriously.

Parents waiting to pick their kids up from school on Tuesday said they got a mass phone call on
Monday night before warning them about the threat.

They said they appreciate begin kept in the know when it comes to their sons and daughters.

"It’s priceless. We get a call we know what’s going on. We can choose to have my son stay home if he wants to, if I don’t feel comfortable, but I feel comfortable sending him to school," said Angela Yaddow.

Some parents said it’s just frustrating to know their kids’ days are interrupted.

"Really I don’t know that I’m so worried about kids carrying out a threat as I am about them just trying to disrupt daily life," said Tracy Wilson.

A former student told ABC 57 he thinks threats like this have increased since he graduated.

"Out of my four years in Concord there was only, maybe one or two that happened, but know it seems like there’s more happening recently," said Ryan Ochs.

But he said he always felt like the school resource officers had everything under control.

"I always felt safe while I was here I always felt if there was anything to be found concord security would of found it," said Ochs.

The superintendent said the school would play it by ear to decide whether or not there would be an increased police presence on Wednesday.

He said everything thing went very smoothly with the checks on Tuesday.