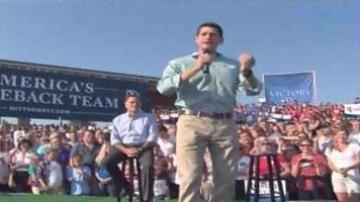 On Wednesday, a Notre Dame alum is scheduled to speak.

Condoleeza Rice is expected to give a speech during Wednesday night's festivites.

The evening will be capped by Paul Ryan.

He will be accepting the nomination for Vice President.

He has been in Congress now for 14 years, but supporters said this will be the biggest speech of his career.

"Millions who may not know a lot about Paul Ryan, other than the headlines that they've read -- are going to get to know Paul Ryan the way many of us know him: as a serious policy thinker," said Sen. Marco Rubio, (R) Florida.

On Wednesday afternoon, Mitt Romney made a quick stop in Indiana where he spoke to veterans.