Condoleezza Rice: Thanks... but, no thanks! 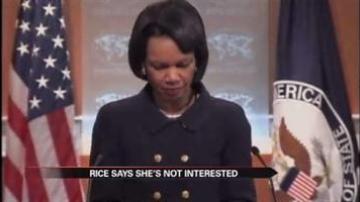 A spokesperson for Condoleezza Rice said on Friday that she isn't interested in being a vice presidential candidate.

Reports surfaced that she was a front-runner to become Republican Mitt Romney's running mate.

Rice served as Secretary of State under George W. Bush.

She said she has no plans to run for any elected office.