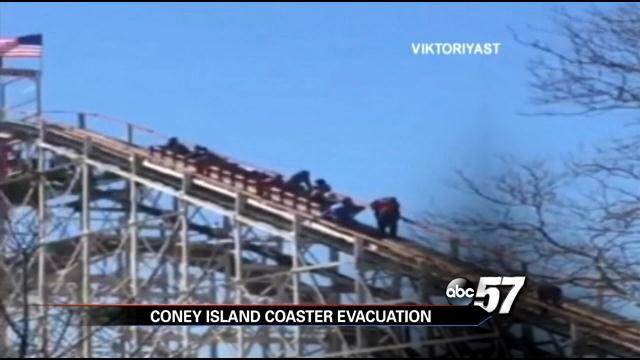 Riders on a New York roller coaster took the long way down Sunday after Coney Island's historic Cyclone got stuck in its track on opening day.

No one was injured in the mishap, which occurred around noon because of an "isolated mechanical issue," a Luna Park spokeswoman said.

The park's operations team helped each passenger down "one by one," and the ride was closed the rest of the day for repairs, spokeswoman Erica Hoffman said.

"Safety is the number one priority for our guests here at Luna Park," Hoffman said. "Nobody was injured and those on the ride were safely evacuated and will be able to come ride again for free when it is open again."

Images and videos shared on social media showed people slowly walking down the tracks side of the 88-year-old wooden roller coaster.

"That thing was the scariest thing I ever did," 24-year-old David Zubin told amNY of the walk down. "The bricks, walking down, looked like it was going to break when you stepped on it."

The Cyclone opened on June 26, 1927, during Coney Island's heyday as one of country's largest recreation areas. With more then 2,640 feet of track featuring 12 drops and 27 elevation changes, the Cyclone was long considered the standard against which "compact wooden twisters" were measured.

An official New York City Landmark since July 12, 1988, Cyclone was listed in the New York State Register of Historic Places on June 31, 1991, according to NYC.com. Its status help preserve its spot in Coney Island after the Astroland amusement park closed in 2008 and reopened as Luna Park in 2009.

By Emanuella Grinberg, CNN's David Shortell contributed to this report