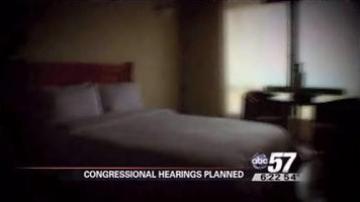 The latest now on the scandal rocking the Secret Service!

Eleven special agents and at least five U.S. service members are accused of heavy partying and soliciting prostitutes in Columbia!

The agents arrive a week before President Obama.

According to ABC News sources, the scandal came to light when a woman refused to leave the agent's hotel, complaining that she hadn't been paid for her services!

"Whether our forces are in Colombia, or any other country, or here in this country, we expect them to abide by the highest standard of behavior.  That's a requirement.  For that reason, we are conducting a full investigation," said Secretary of Defense Leon Panetta.

Lawmakers want to know if this was a one-time occurrence or routine behavior.