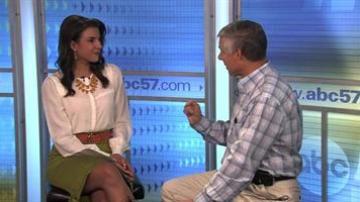 Upton is back in Michiana during Congress' break for the 4th of July holiday.

Upton is a member of the committee grilling General Motors on Capitol Hill after millions of recalls.

"We've initiated a number of hearings," said Upton. "We've had Mary Barra the CEO of GM testify twice. She's going to testify before the Senate later this week. We want to find out what happened? Why didn't the law work?"

Upton said they are reviewing more than a million pages of GM documents.

"The bottom-line is this, in fact, GM was aware that they had these switch problems, the ignition switch, some time ago, years ago, and failed to do anything about it," added Upton.

Upton summarized the bill on Wednesday saying if a vet faces a wait of more than 30 days at a VA facility, then the veteran can choose to get care locally.

"You can go to St. Joe, or if you live in Kalamazoo, go to Kalamazoo," said Upton. "You go to your local hospital, your local doctor and you'll be reimbursed by the VA instead of spending all that time going back and forth to get quality care."

The Congressman adds they still need to figure out why long waits were happening within the VA system in the first place.

The U.S. House just wrapped up a week focused on energy issues.

Upton said it was important to focus on those issue with growing problems in the Middle East.

"We've increased domestic supplies here, but can you imagine if we hadn't done that?" asked Upton. "And now with gas prices going up again we need to push for what we call 'all of the above', let's use all of the resources that are there, so that we can make a better quality of life for all Americans."

Upton said when Congress returns to session next week, it needs to focus on America's highways.

"We have a pretty big issue and that is that the Highway Trust Fund is going broke," said Upton.

This money is used to reimburse states for construction and other projects. It is funded by taxes collected on gasoline.

Upton said since more people are driving fuel efficient vehicles and others are driving less because of high gas prices, gas sales are down, and the fund is receiving less.

"We've got to find about $12 billion in the next couple weeks to reimburse this fund so that the construction projects don't stop and I think we'll be able to do that," said Upton.