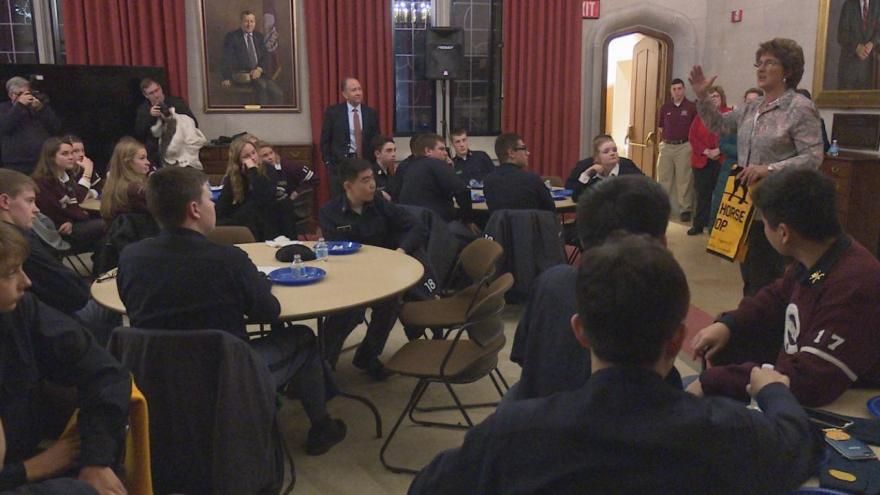 Students at Culver Military Academy are gearing up for a ride to the White House.

Monday, students in the school’s Black Horse Troop and Equestriennes program received a few encouraging words from Congresswoman Jackie Walorski before the kids set off for our nation’s capital.

“When they talk about inaugurations, no matter who the president is, culver military, the black horse troop is one of the first they request,” said Walorski.

There’s nothing like praise from a prominent politician over pizza.

“I was just telling them, there’s a lot of east coast teams, but there’s nothing like what the culver military academy brings to this equestrian team,” said Walorski.

Monday, the congresswoman met with the students during a pizza party.

By Friday, they’ll be taking their talents to Washington D.C.

“Definitely been on some big stages before but this is not even comparing,” said student Bryson Bankston.

While most people would be a bit intimidated by that opportunity, these kids aren’t sweating too much.

“I would say on a whole we’re prepared but as an individual I am nervous,” said Ashley Dillard.

That’s because the school has a history of inaugural parade riders.

“A lot of them help pay it forward for us to go, I just found out that over half the donations made to the inaugural are helping to pay for a lot of students to go on a lot of funds,” said Dillard.